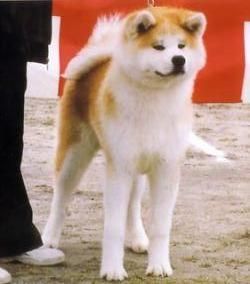 History of the Japanese Akita

The name "Akita" takes its roots from the japanese prefecture (city) of Akita. "Inu" stands for "dog". The Akita-Inu's ancestor first appeared during the stone age, in the Odate region near the village of "Akita". At that time, people lived mainly from hunting. This is where the domesticated dog first showed his value to man. During the Edo era (1603-1867), the Tokugawa family is reputed as being the creators of the Akita-Inu. Two lines were formed; one line was used for hunting in mountain villages, the other, was used by the nobility for personal and property protection. During the Tsunayoshi era, a 500 000m2 palace dedicated to Akitas was built.During the Meiji era (1868-1912), dog fighting became very popular and unfortunately for the Akita-Inu who never backs down, these dogs were crosssed with European breeds to produce a better fighting dog. Between 1912 and 1926, a devastating rabies outbreak almost decimated the breed. In 1922, Dr. Watase, alarmed by the decline of the ancestral Akita, decided to restore the breed. He searched deep in the mountain regions for untouched Akita-Inus and eventually, the Akita-Inu was re-born.It is during the Showa Era that the Akita-Inu became a fixation among the japanese people. The mayor of Odate at the time, Mr. Uzumi, created the Akita-Ken Club in order to protect Akita rights. In 1931, the Akita-Inu was declared a national treasure and was placed under the protection of the emperor himself.World War II had a disastrous effect on the Akita breed. Through the efforts of Morie Sawataishi and others, the Akita breed began to revive itself soon after. Two main bloodlines emerged. In Odate, a breeder by the name of Ichinoseki re-created a line of pure red, sesame, brown and white Akita-Inus. Another line also appeared from a breeder named Ito. This line named Dewa, consisted of larger dogs, of brindle and black color with white markings.  From the crossing of these 2 lines originated the modern Akita-Inus, however, the influence of the Dewa line has all but dissappeared, while the Ichinoseki line's influence remains because of some important past contributors to the breed.